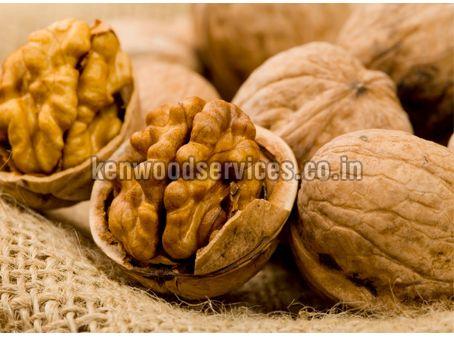 Walnuts are rounded, single-seeded stone fruits of the walnut tree. The walnut fruit is enclosed in a green, leathery, fleshy husk. This husk is inedible. After harvest, the removal of the husk reveals the wrinkly walnut shell, which is in two halves. This shell is hard and encloses the kernel, which is also made up of two halves separated by a partition. The seed kernels - commonly available as shelled walnuts - are enclosed in a brown seed coat which contains antioxidants. The antioxidants protect the oil-rich seed from atmospheric oxygen so preventing rancidity.

Two major varieties of walnuts are grown for their seeds — the English Walnut and the Black Walnut. The English Walnut (J. regia) originated in Persia, and the Black Walnut (J. nigra) is native to eastern North America. The Black walnut is of high flavor, but due to its hard shell and poor hulling characteristics it is not grown commercially for nut production. The commercially produced walnut varieties are nearly all hybrids of the English walnut.

Other species include J. californica, the California Black Walnut (often used as a root stock for commercial breeding of J. regia), J. cinerea (butternuts), and J. major, the Arizona Walnut.